Finland’s largest sheet metal press to be built in Kurikka

Relicomp Oy, located in Kurikka, has made the largest investment in the company’s history: almost three million euros. Relicomp’s premises will be expanded by 1,000 square metres in order to house Finland’s largest sheet metal press. “We work without compromise in order to improve the productivity and quality of sheet metal technology. We are also a major employer in the Southern Ostrobothnia region. Our investment will further improve our production efficiency and allow us to employ up to dozens of new people in the near future,” says Marko Jyllilä, Managing Director for Relicomp Oy.

The press is manufactured by the Swedish AP&T. The unit is 9.5 m high and its pulling force is 1,200 tonnes. Relicomp Oy has also started exports to Sweden, which appears to be a significant market for the company.

The company’s revenue amounted to EUR 15.5 million in 2017. With strong growth and the new investment, revenue is expected to grow by EUR 2 million annually and reach EUR 21 million in 2020.

Relicomp Oy is a Finnish metal industry company specialising in sheet metal technology, founded in 1992, providing services from product development to component manufacturing and system deliveries. The company is a family business that started in founder Reino Kangas’s garage and already employs 135 people today. It is currently led by the second generation.

The expansion will be completed during the first quarter of 2019. 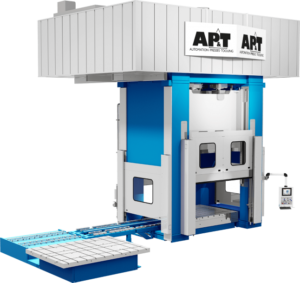