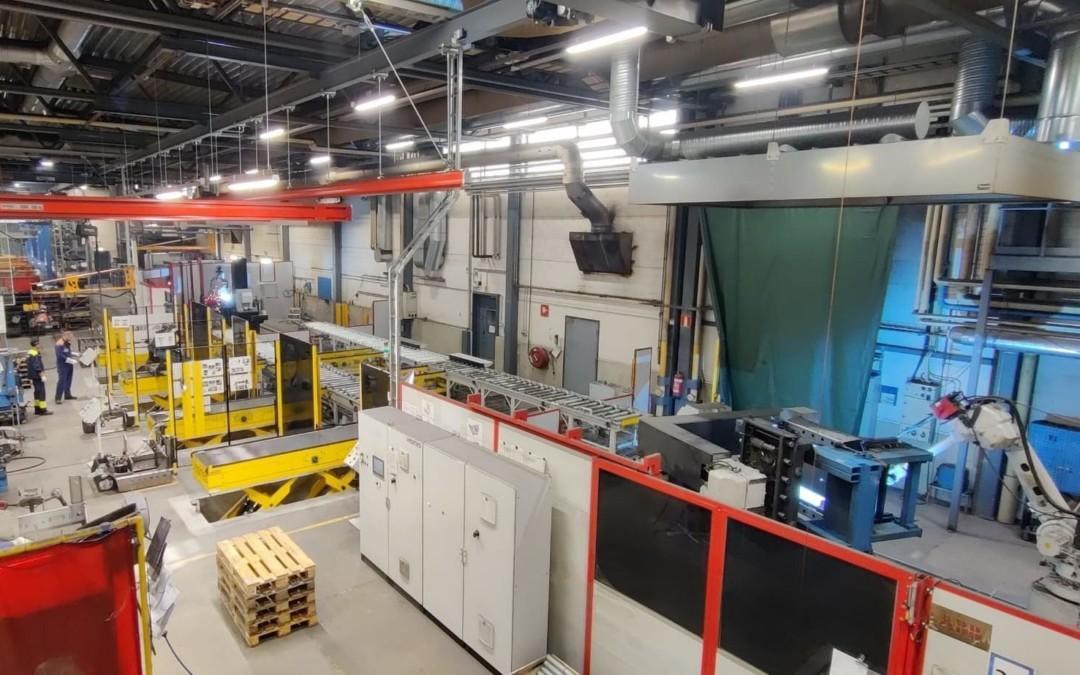 At the start of the summer holidays, the installation team of the new FMS cell got to work full steam. The modification work of the welding shop commenced right before the summer holiday season in July as production wound down. Come September 2022, the new cell was well on its way to reaching the target speed.

The new cell adheres to Relicomp’s strategy, which enables preparing for the manufacturing of all new kinds of products in the future. In fact, the owner of the FMS cell project, Tero Syrjälä, says that the cell has been built for long-term viability. In the future, the welding shop may be able to harness more workstations for the FMS cell preparation tasks:

“We have been able to respond to the current demand well, and this new cell enables us to use multiple different sources. We have significantly diversified the utilisation of the cell, which gives us a wealth of opportunities for the future.”

Improvements to efficiency, use of space and ergonomics

The new cell is identical with the old one, with the only difference being the opposite handedness. This yields significant benefits for production and maintenance, since the same spare parts can be used for both cells. They can also be used to manufacture the same products using the same programs. In other words, if one is being maintained, the other can continue running.

In addition to installing the new cell, changes were made to the old one. This was partially to make room for the new cell but also to use the space more efficiently, improve ergonomics and enhance material flows. Now the new and old cell together take up only slightly more space than the old one did before. For example, the cranes were moved to run along ceiling-mounted rails, which freed up floor space and provided new opportunities for preparatory work phases and workstations. According to Tero, improving occupational safety was another important factor driving the changes.

“The staff had a clear wish for the feed and discharge gates to be lowered to floor level instead of the current arrangement with fixed steps. Now every employee can move the gate to a comfortable height. At the same time, we gained a solution that enables using a pallet jack to bring goods to the cell, where before a crane or forklift was always required. Ergonomics and occupational safety have improved a great deal, which has been a great thing to notice at this point of the project.”

Bruised but not beaten by the component shortage

Still, the project was not entirely free of difficulties, as has been the case with many other companies in the manufacturing industry during the recent months. Due to the component shortage, the project team and the FMS cell supplier were hard-pressed to get the cell operational in the original schedule. The target date was not quite achieved, but fortunately the start-up did not lag far behind.

“The entire project team deserves thanks for the end result. Everyone has done such an amazing job for this project. At times, the component challenges seemed very dire, but we were eventually able to find the right solutions in cooperation with the project team and supplier; sometimes we even scoured the globe for the components. Even though we are still missing some components, we have been able to get the machines into production,” says Tero, praising everyone involved in the project.

The entire staff participates in the development

The FMS cell is already in heavy use, but the development work continues. The aim is to improve and adjust the speed of the cell processing devices with the suppliers. Unnecessary work phases of both people and devices will be eliminated from the process. Tero says that the various operating models related to running the cell itself will be developed to boost production efficiency.

“The staff have already provided plenty of ideas on what we could do. They have been active, and with their help we can always move forward. We have the willingness to develop our operations continuously. Obviously, maintaining the status quo is also sometimes necessary, but continuous improvement develops the operation of the cell in terms of the equipment and our own methods.”

Recruitments are under way and new people have been hired

In the story we published in February, Tero indicated that getting the latest investment running after the summer holidays would mark the time for new recruitments for Relicomp. Even at the current rate, the FMS cell has increased production volumes, so new professionals have been hired. Applications will remain open until the end of September, which means that there is still time to join the team.

“The investments have kept the number of employees on a constant upward trend as a result of growth. The yield of every investment has been high enough to necessitate more staff to match the increases in production and demand. We have received a lot of applications, so there is a clear interest in us as an employer, too,” Tero says, in reference to the recruitment processes.