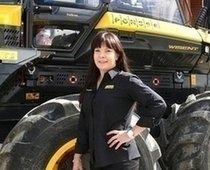 Incremental sheet forming helps take the guesswork out of finding the right tools for metalwork, as prototypes can be modelled before costly equipment needs to be purchased. For example, the forestry machinery company Ponsse can find itself investing millions in tools. Smaller companies can also benefit from the process. Relicomp Ltd is the only company in the Nordics that provides customers with numerically controlled incremental forming technology.

Sheet forming is often perceived as expensive and many believe it to be time consuming. The Finnish company, Relicomp, uses incremental sheet-forming technology to quickly and cost effectively test even individual products. The process is mostly used to create prototypes, but entire series of products can be produced if components are large or if the quantity to be manufactured during the product life cycle is not very sizeable. Examples might include drilling rig hoods.

“From as early as the iteration stage, we can create several models and only then will the customer purchase tools. There are no moulding costs at all. Previously it was necessary to look at designs on a computer screen and, on the basis of just an image, to make a purchasing decision on pressing tools that could cost up to 100,000 euros,” says Marko Jyllilä, CEO at Relicomp.

Incremental sheet forming is also a relatively new technology in the Nordics. Winner of the Plootu Fennica sheet metal product award in 2012, Relicomp has used the incremental sheet-forming technology since 2005; it has opened up new markets for the company. The procedure accounts for one-third of the company’s 15 million euros in annual sales.

“Dieless Amino incremental sheet forming was discovered in Japan by way of a joint project involving Aalto University and Tekes. My father-in-law – the founder of this company – brought it back to Finland. The forming process strengthens the material, which reduces the need for welding and ensures that the components remain in good condition longer,” Jyllilä explains.

In autumn 2011, the stock-exchange-listed forestry machinery company, Ponsse Plc, began a reform process driven by new European Union emissions directives. Production of the last models of its new range of machines will begin at the end of this year. All of the machines’ moulded outer body parts, such as hoods, bumper housings, lamp housings and cab side boxes, have been designed in close cooperation with the company’s long-time partner Relicomp. At the same time, Ponsse wanted to benefit as much as possible from the advantages of deep-drawing technology, such as better dimensional accuracy and tougher structures.

“What was crucial in choosing a partner was the potential to produce different kinds of prototype versions before selecting tools. Incremental sheet forming technology saved on the cost of having to modify tools and introduced flexibility to the project, as we were able to test different designs first. If we had bought the tools immediately that would have locked in many other phases of the development process,” says Tiina Haapalainen, Ponsse procurement development manager.

The cooperation between Ponsse and Relicomp dates back to 1999, when Ponsse launched a new range of machinery.

“We wanted long-term agreements with our most important partners, because equipment procurement always requires large investments. Subcontractors are the best experts when it comes to their own technology, and we trust that by collaborating closely on product development, we will be able to manufacture products optimally and cost effectively. Also, our cooperation with Relicomp is easy because our tools manufacturer is close, and the parties know each other and understand the importance of their roles,” Haapalainen says.

Production in their own hands

However, it’s not always easy being a subcontractor to a stock-listed company. Subcontractors must be able to develop their businesses and processes amid growing competition and rising labour costs. “We have a right to use the ‘Made in Finland’ symbol on our products and we want to help maintain Finnish competitiveness. That means our subcontractors must be ready to invest and place emphasis on product development. There aren’t many such suppliers in Finland. However, we want to purchase components from suppliers that are reasonably close. For example, if we were to buy similar products from Asia, turnaround times would be longer,” Haapalainen points out.

The Ponsse manager says that one of Relicomp’s strengths is that its production chain is short, and sheet metal-related manufacturing lies largely in its own hands. This means that product modifications are quickly implemented, which also means faster delivery times for customers.

“We see it as a plus that as a family business Relicomp has stayed the course. Tiina and Marko Jyllilä are a very approachable, outgoing and competent entrepreneurial couple. It’s very easy to work with them. We especially appreciate the fact that since we are very open ourselves, we have been able to find a team with the same kind of spirit,” Tiina Haapalainen says.

Relicomp owner and CFO, Tiina Jyllilä, says she’s also pleased with the open cooperation. “The level of commitment with Ponsse is completely different from that of many other customer. They are constantly looking after their supplier network. For example, we have teams all the way up to production attending Ponsse’s supplier day event. People can take pride in their work when they see how it looks in the final product. Since they openly share their development plans, it also forces us to think about ongoing improvements and development. We think it’s a relaxed way to operate,” Tiina Jyllilä concludes.